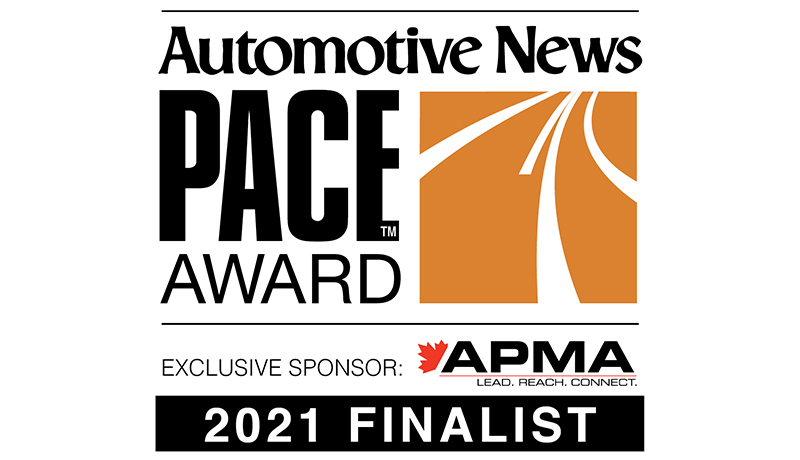 RoboSense Named A Finalist For The 2021 Automotive News PACE Awards


April 27, 2021， RoboSense (https://robosense.ai/), a smart and automotive LiDAR system provider, was named as one of the finalists for the 2021 Automotive News PACETM（Awards for its smart, mass-production-ready and automotive-grade solid-state LiDAR RS-LiDAR-M1. RoboSense is the first China LiDAR company to be ed as one of the 27 shortlisted suppliers from over 200 global automotive suppliers for its technical innovations and commercialization capability for autonomous vehicles. Last year, 13 top suppliers including Continental, Delphi, Magna, Mobileye, and Valeo won PACE TM Awards 2020. 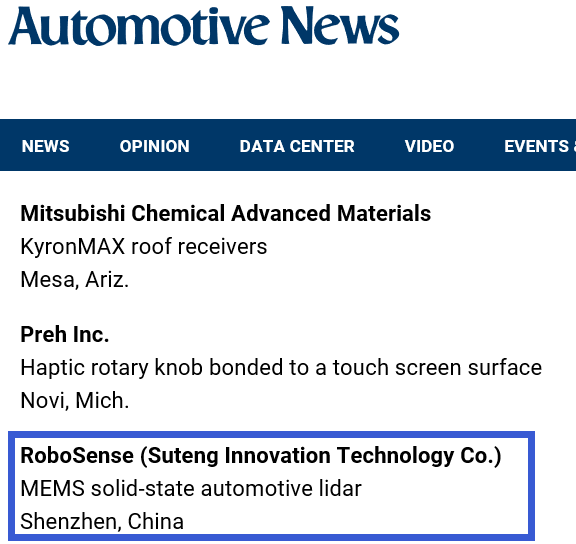 The PACETM Awards presented by Automotive News and the Automotive Parts Manufacturers’ Association (APMA) and now in its 27th year, is given to automotive suppliers in recognition of technological innovation in product or processes that has reached commercial application. Judged by an independent panel of technologists, the PACETM Awards are recognized around the world as the industry benchmark for innovation. The awards which included an extensive review by an independent panel of industry expert judges, are to be presented on Sept. 30 at a ceremony in Detroit.

"This year's class of PACE finalists showcases the rich innovation underway worldwide in the business of moving people and things," said Steve Schmith, director of Automotive News PACE judging. "The finalists represent companies operating throughout the automotive value chain who are not only driving game-changing approaches to product development, but also reimagining the customer experience and creating new ways of generating revenue." 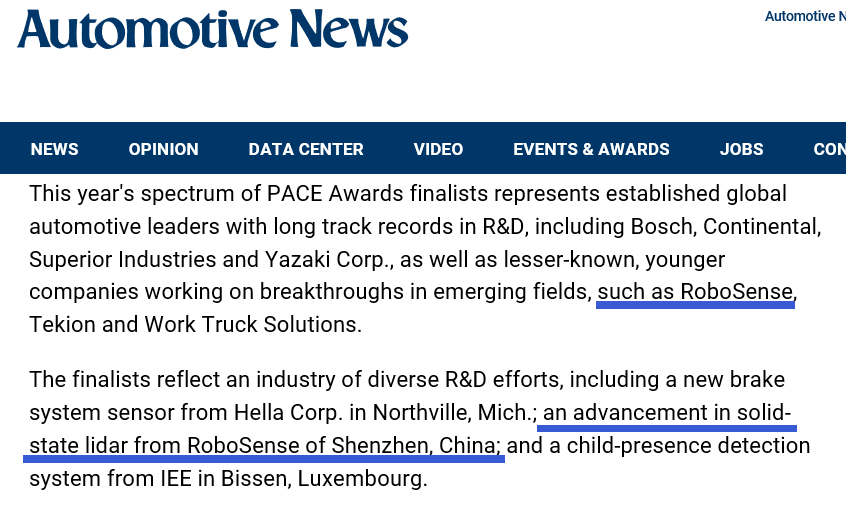 The commercialization of technological innovation is the key point to form the authority of the PACE Awards. It aims to commend automotive products that bring innovation to the market, which means the product must have benchmark cooperation projects with OEMs in pushing the commercialization. Based on innovative and mature MEMS solid-state LiDAR technology, the RS-LiDAR-M1 meets all requirements of the industry for automotive-grade LiDAR including performance, stability and reliability, intelligence, size, manufacturing capability, and cost, to accelerate the commercialization of autonomous vehicles and ensure the safety of autonomous driving.

“We are honored to be shortlisted in the final group of the prestigious 2021 Automotive News PACETM Awards. It shows the recognition of our smart solid-state MEMS LiDAR M1’s superior innovation, technological advancement, and business maturity for commercial L3+ autonomous vehicles,” said Mark Qiu, RoboSense Executive President and Co-Founder, “We will continuously improve LiDAR performance and lower the cost for commercial autonomous vehicles.”